MPM3550 not operating as expected - continued

This was entered as a follow up question on my original post. I guess the other was marked as closed.

This is the LGA-18 package so inspecting the connections isn’t really possible. I suspect that the liquid may have been due to the cleaning process at the assembler. I didn’t realize that the pin one indicator is actually a hole in the top metal cover. I am concerned that the can filling up with some solution may have caused an issue.
Some additional questions,
1 - I have a pullup on the power good circuit and a review of the data sheet leads me to believe that isn’t necessary. The internal diagram shows a pull to the internal VCC. I removed that resistor but didn’t see any change in the behavior.
2- As I stated, I’m concerned that some liquid got under the cap during cleaning. Are there any special instructions for assembly for this part? Should the hole be covered to avoid this?
3 - I’ve attached an image of the PCB top layer. It matches the recommendations pretty closely. Do you see any issues?
4 - I measured the output voltage on a scope and I see it start to rise quickly until it gets to about 3V then it ramps down more slowly to a level before rising quickly again. This resembles a sawtooth. It almost looks like the circuit is going into a thermal shutdown, cooling off and then restarting. I’m not feeling any heat on the cap. Does that provide any clues?
5- This supply acts as a pre-voltage stage for other supplies on the board. There are twelve CUI PDSE1-S5-S9-M 1W supplies that use the output of the 5V. There isn’t any way of disabling these supplies and bringing them up slowly but they only have a small load in the current configuration. Could this be causing an issue?
6 - I’ve submitted a request for a call. Hopefully that happens soon. We are also getting evaluation boards so we have something to compare with. 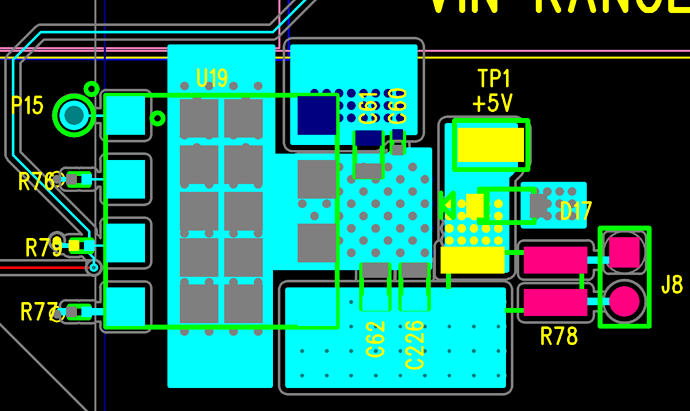 It looks like resolving the issues you are seeing will require direct assistance from one of our FAEs. If they haven’t already, our MPS Now team will soon contact you in response to your request (#6).

Hi,
Sorry for the late reply. This was an issue with a power supply farther down the chain. I have four supplies powered by 12V input, the first being the +5V mentioned. Each PGOOD is tied to the next EN in the chain. The last supply was a MPM3515 with a bad resistor value on the pull down for the feedback pin. That supply was going into condition where it was causing the 12V input to hit a current limit state. Once I fixed the resistor, all four supplies operate as documented. The output of the first supply was masking the real issue.